Cattermole – What An Odd Name!

‘Cattermole’ is an odd name.  Many people are surprised to hear that it is of English origin.  My husband has (almost) always been proud of his last name.  As a teenager and musician, he changed his stage name to Bobby Cater, thinking, I guess, that Cattermole just wasn’t cool.

However, Bob remembered many of the stories about family ancestors that were passed on to him by his father and uncle.  He knew that some of his ancestors were artists and authors.

So, when I started studying genealogy, Bob’s interest was piqued.  Through Ancestry, we found that the spelling of the name Cattermole was set in the 1750’s, in and around London.  William Cattermole, born in 1766 had two sons, Richard and George.  Bob is a direct descendent of Richard Cattermole.

Richard Cattermole was an artist, an author, and an Anglican minister.  He wrote mainly history and morality-based books and articles. Richard was vicar of the Anglican church, St. Matthews, in Little Marlow, Buckinghamshire, outside of London.  He was also secretary of the Royal Society of Literature from 1833 to 1852. And through this position, he was a friend of Samuel Taylor Coleridge.  Coleridge became godfather to Richard’s son, George Richard Coleridge Cattermole, in 1828.

Richard was commissioned to complete a series of paintings of rooms in Kensington Palace and Hampton Court.  The reasons for these commissions is unclear but the paintings have survived and are stored in several British collections.

Bob and I have visited both Hampton Court and Kensington palace, in the last few years.  Bob’s goal for these visits was to compare Richard’s paintings (available through the internet) with the actual rooms in which they were painted.  Imagine his excitement when the paintings of the royal chambers in Hampton Court were almost identical to the rooms as they exist today.  He wasn’t as fortunate at Kensington Palace.  The queen’s chamber is very different from the painting.  It had been bombed during World War II and, as a result, was rebuilt with a different layout.

We also visited St. Matthew’s Church in Little Marlow and received a warm welcome from the pastor and parishioners.  The church building was begun in the 900s A.D.  We were shown the chalice that Richard Cattermole would have used during communion and his name on a wall plaque.

On our search for “all things Richard”, our son and daughter-in-law travelled with us.  It was enjoyable to see the interest Eric (also a Richard) took in learning about his heritage.  Perhaps he will pass on this interest and pride to future generations. 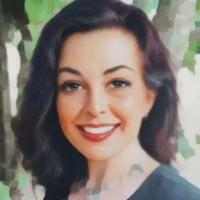